Q: You worked for Lithuanian television?

A: I worked for the radio. And on January 10th our personal division chief D.Kaitulis asked me to work for television. I was radio announcer, and in the middle of January I started with a new team with Algirdas Kaušpėdas, who was head of television, with Pranas Morkus, who was head of program department in Lithuanian national television at that time, and I was executive secretary of program department. And so I was living in the building in front of Lithuanian National Radio. There are two buildings, you know, old radio building and new television building, not new now, of course. And so, what I remember, I was asked by my colleague mr. Algis Sadukas to go on duty on radio, I was on vacation at that time, but they asked me to go on January 13th, at 7am in the morning to radio to read news, because everybody was busy, on duty in different places. Finally it was not necessary because television was occupied at 2am at night.

Q: How did the LRT TV program look like in the week before January 13th?

A: In the years 1990–1991 on working days usually Lithuanian TV transmitted its program in the morning from 7 to 9 am. and evening program from 6 p.m. until midnight.

Non stop program started on 10th of January and was interrupted by Soviet forces at 2 am on 13 of January.

On 7th of January there were some changes in government and Russian forces were moving and marching in town, and there was some feeling, that something will happen, maybe the next day. The first blood was at the Press house in Karoliniškės, when it was occupied by Soviet forces. Some people were defending it, they had no guns, of course, and one young guy, Vitas Lukšys has a waterpipe in his hands, he was spreading water on the troops. And one colonel of Russian army took machine gun and shot at this guy. He was Vitas Lukšys, he was wounded to the head and he was the first person who was wounded. Report about occupation of Press house was shot by Norvegian journalist and was on many TV programs over the world.

So on 10th/11th of January was decision made, that they lead non–stop program on television, because soviet troops are ready to occupy parliament, government and televison, and another important buildings of our state. So non–stop program that was the idea to inform all the free world of the events made by the troops in Vilnius, in Kaunas and in all Lithuania.

Q: The decision was made by the parliament?

A: By parliament leader Landsbergis. But I don’t know exactly, I don’t know exactly who proposed this idea. Cameras were staying in parliament and Landsbergis and other Parliament members asked people to come to the parliament and protect it from Russian forces. And television was filming all this process. I don’t know how many thousands of people were there on the square, but it was a big crowd surrounding the parliament building, may be 50–60 thousands. And it was very impressive, that people came and said we will defend our parliament, our heart of Lithuania, as it was popular to say at this time. And we will defend it and we will die if it is necessary.

Q: So Lithuanian TV had turned into a news channel like CNN.

A: Exactly, live report, all the time. The audience was very high, I don’t know a percentage, very close to 100 percent. And really, this transmitting, this program... They couldn’t occupy it in the middle of the night in silence, because we were broadcasting all the time, everything was on air, they couldn’t do it without media attention. And so they refused to attack parliament, they just attacked television that was reporting all this defending of parliament. And people were asked by Landsbergis on TV to defend parliament, TV tower and TV building and other important buildings like telecom telephone stations, like television in Kaunas, like TV tower in Sitkūnai, but most people were gathered in Vilnius around the parliament.

Q: Were all buildings, TV tower, Radio and Television occupied at the same time?

A: Yes, it happened at 1.50–2.30 am on 13 of January. You know, there is a big distance between Television and TV tower, maybe 3 km. Many Western journalists were in the television building, and practically all shots were made at the TV building. And only few shots were filmed at the TV tower, but all people who died, died at the TV tower because there were no journalists at that place. Troops were afraid of television.

Q: You are saying, there were no TV crews at the TV tower?

A: Maybe there were, but most of shots that I saw in different films, most of them were made at TV building.

TV building is Konarskio 49 and my flat was Konarskio 22, flat 11, 3rd floor in front of old radio building.. My wife and maybe 10 other people, who were gone from different places of Lithuania to defend Parliament, went out my flat at 1:30 and leave for the parliament. We had a late supper, and I was washing dishes after our meal and it was maybe 10 minutes to two, and then I heard some tck, tck, tck and bum, bum and such sounds, and because I had been in Soviet army, I knew it was shooting from machine guns and big guns of tanks. I went out of my house, and I saw a line of tanks like T 72, BTR 60 and BRDM with loud speakers, standing between my house and radio and television buildings. What was most impressive, there was a big crowd shouting in Russian “Fascist, Fascist! Killers!” (Fashisty, Ubijcy). Fascist was the worst word in Russian.

There was the program registration room, were we, announcers, took our readings from.

Four Russian soldiers in special uniforms were staying at the building of Radio and they had machine guns in their hands and they were shooting to that room on 4–th floor, the centre of all the news of radio work in the night and people were in that room, but it wasn’t possible to kill, because the people were laying on the floor. But soldiers didn’t shoot into the crowd in another side of street. They shoot a little higher, over our heads.

One more moment, that I remember. There were busses in front of the building, and when the soldiers came were shooting and beating, and there were some explosions, and the door was exploded and they came into the building, and defenders ran away and troops were inside the building. And I looked, that somebody was lying under the busses, maybe it was 5 or six busses, I came close to this to look, maybe somebody is wounded, and at that time, one Russian soldier, little guy with big gun, went among busses and he shouts: Lay down! He beat me with his gun, but didn’t shoot.

When you see old Radio Building, there is old gate, that gate was broken by tank and the tank stayed there for a month and the gun was pointed right at my window, and Russian soldiers with guns were on duty in front of our house, and my son was five years old, and he was frightened and was afraid to go out and I cant explain to him now that Russian people are normal people.

Q: After the TV seized broadcasting, did you only have radio in Vilnius?

A: There was no radio and television in Vilnius, for how long, I don’t know. They started speaking from Parliament, one of my friends, Virgis Mičiulis, asked me at 10 o’clock January 13 to go to the Parliament and work as journalists there, but I was very tired and wanted to sleep, and when I went there later, in the afternoon, everything was locked, so I went to Kaunas on 14th or 15th and started working here.

Q: Could the Kaunas program be seen in Vilnius?

A: No, this program was not seen in Vilnius. (draws map with transmitting stations in Lithuania). There is circle of TV transmitting system, but when Vilnius was occupied, it was out of the system and nobody could transmit from and to Vilnius. And over the same system, Kaunas was transmitting to Riga, Tallinn, Finland and satellite. Vilnius also couldn’t see Polish TV. And Vilnius had their transmitter in parliament, and it was not very good quality, it was hand–made, but it covered the town.

On 13-th of January in Kaunas Modestas Patašius started working in 2.40, first thing was at 2.20 when radio tower engineers started talking on air from TV tower in Sitkūnai, but was no picture yet, just TV signal test board.

A: One person at first, Modestas Patašius, but he didn’t know what was going on in the town, and so Raimondas Yla came to with the reports… but I don’t know because I was not here.

Q: How did the program look?

A: It was non-stop program, from the studio Daukanto 28a in Kaunas, reports from the town and from local TV correspondent. Kaunas became the Lithuanin TV center for 8 months.

Q: When were the pictures from the hospital broadcast?

A: I was in Vilnius on 13 and 14 of January, so I can not exactly tell what happened in Kaunas at that time.

When I saw the picture of wounded Loreta Asanaviciute, I was shocked, I saw it maybe on the 14th, not three seconds, or half a minute, I saw ten minutes report, just filming, I don’t know if it was on air, I just saw raw material. And I was shocked. She was alive for four hours in the hospital and the reporter interviewed her. I don’t know how much was on air. When I came to Kaunas, everything was nice, and there was no blood in my eyes, and it was the first broadcast from hospital, that I saw, when they brought the cassette.

Q: In retrospect, what was the role of television at that time, in your eyes?

A: Television has a role in Lithuanian history, not only in our minds, television was maybe the reason, why Russian tanks didn’t attack the Parliament, because everything was on air?

Q: Can you further explain that?

A: It was politic of Glasnost of Gorbachev, at that time they were afraid to be shown on TV when they were attacking parliament, when they were doing bad things, to all world, because Gorbachev had very good contacts to USA and other countries.

Q: But it was not shown on Soviet television?

A: Of course not, but all over the world, all reports, first blood at the Press House, TV tower, and all events in Lithuania,

Q: But the Western World was preparing for the Gulf War..

A: Yes, but it was very strange, it was much bigger event than Lithuanian TV occupation, but really, reports from Lithuanian events were in the headlines of all the world television stations.

Q: But why was it important that it was broadcast in Lithuania?

A: Because it was unification of nation, maybe, it was our war, we had no Lithuanian army, but every person in Lithuanian became a fighter, a defender of Lithuanian independence in their minds. And television was main factor of politic at that time. 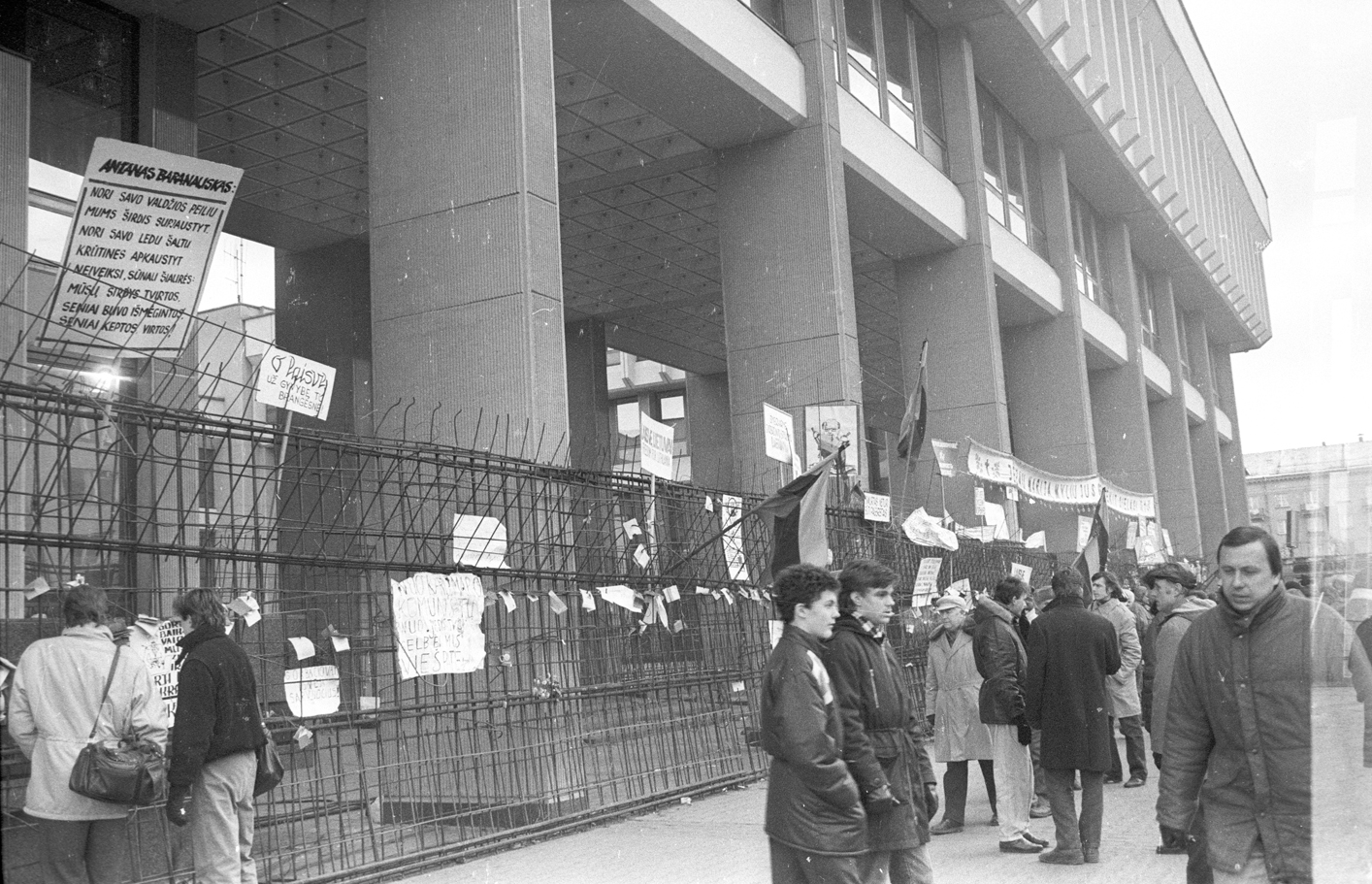